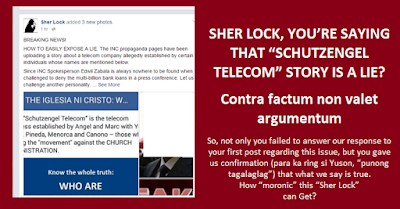 TRYING to fool his readers, this “moron” calling himself “Sher Lock” made a response but only shows how moronic he is. Remember this:

“The reason ‘Sher Lock’ gave in saying that Schutzengel Telecom is of Bro. EVM and the Sanggunian members is the “office address” of the Schutzengel Telecom. Sher Lock said, “The address in the document pointing to Central Office as the business address, the very same headquarters office of EVM is the dead giveaway.” Sher Lock is not only a liar, but also a “moron.” Schutzengel Telecom was established in 2009, and where was the office of Angel and Marc in 2009? Yes, you are all correct, in Central Avenue, New Era, Quezon City.”
SEE: https://www.facebook.com/theiglesianicristo/posts/536881979830068

In his latest post regarding this issue, this “moron” calling himself “Sher Lock” said:

“…these INC propaganda pages linking certain innocent individuals like a certain CANONO to a telecom company, may I therefore challenge you to a joint presscon with media to show proofs that this CANONO is in anyway connected to the telecom company.”

Got you! Please ponder this:

(1) The real issue is that Angel and Marc established a telecom business, but “Sher Lock” wanted to “save” Canono – “I therefore challenge you to a joint presscon with media to show proofs that this CANONO is in anyway connected to the telecom company”. Sabi nga sa Tagalog, “ang tinamaan ang uma-aray”! Still denying Rovic Canono and Sher Lock are one?

(2) When Sher Lock said, “I therefore challenge you to A JOINT PRESSCON WITH MEDIA to show proofs that this CANONO is in anyway connected to the telecom company” – this means that he is ready to show his face to the public and reveal his identity. SO, IF YOU ARE REALLY SINCERE WITH THIS CHALLENGE, REVEAL FIRST YOUR IDENTITY! Akala mo maloloko mo kami? IKAW ANG MAY PAHAYAG NIYAN KAYA PANINDIGANAN MO IYAN (“A JOINT PRESSCON WITH MEDIA”), IPAKITA MO MUNA NA TOTOHANIN MO ANG HAMON MO NA HAHARAP KA SA MEDIA KAYA ILABAS MO MUNA ANG TUNAY MONG IDENTITY. FAILING TO DO SO, WILL ONLY MEANS YOUR ONLY “BLUFFING” – IT’S AN EMPTY THREAT, AND YOU HAVE NO INTENTION TO FULFILL IT. FAILING TO REVEAL FIRST YOUR IDENTITY ONLY SHOWS YOU’RE NOT ONLY A “MORON” BUT ALSO A COWARD.

(3) Also when he said, “I therefore challenge you to a joint presscon with media to show proofs that this CANONO is in anyway connected to the telecom company” – he unconciously (well what do you expect with a “moron”) confirmed the involvement of Angel, Marc, Yuson, Farley and Menorca, and only “saving” himself (we all know that Rovic Canono is also “Sher Lock”). His statement is equivalent in saying “only Angel, Marc, Yuson, Farley and Menorca are connected (involved) with Schutzengel Telecom, but not Canono”. What a fool! Kung baga sa Tagalog, “sa paghahangad na iligtas ang sarili ay inilaglag ang mga kasamahan mo.” LOL

We now have a “hostile witness” – a witness among themselves – confirming the connection of Angel, Marc, Yuson, Farley and Menorca with “Schutzengel Telecom”.

So, not only you failed to answer our response to your first post regarding this issue, but you gave us confirmation (para ka ring si Yuson, “punong tagalaglag”, LOL) that what we say is true. How “moronic” this “Sher Lock” can Get?

SHER LOCK THIS WHAT HAPPENED IF YOU TRY TO TWIST THE TRUTH! HOW CAN YOU ARGUE WITH FACTS? 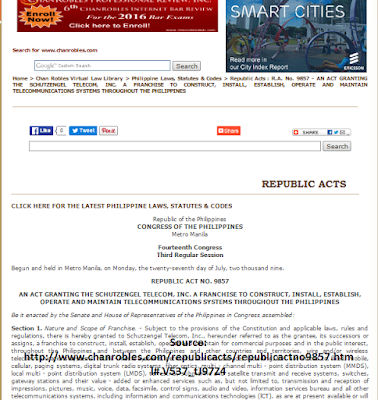 Are you saying that RA 9857 is a fabrication? Can you prove to us that RA 9857 don’t really exist that we only mde it up? Well, only fools will believe you!


IT IS A FACT THAT YOUR “BOSSES” (ANGEL AND MARC) ESTABLISHED A TELECOM BUSINESS, VIOLATED THE MINISTERIAL CODE OF ETHICS AND THE DOCTRINE OF THE CHURCH, AND BECAUSE OF GREED AND LOVE OF MONEY THAT’S WHY THEY STAGED A REBELLION AGAINST THE CHURCH ADMINISTRATION.

WE ARE NOT FOOLS, THAT’S WHY WE ARE ONE WITH EVM