Felix Y. Manalo an Angel and Jesus Christ a Man? 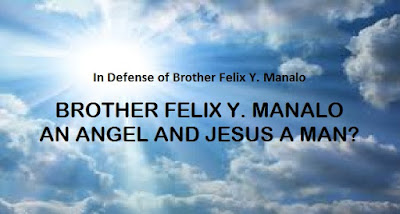 BROTHER FELIX Y. MANALO AN ANGEL AND JESUS A MAN?

THE TRUTH IS, they asked these questions because they misinterpreted and misunderstood the doctrines or teachings of the Iglesia Ni Cristo. We never said that Brother Felix Y. Manalo is an "angel" in his state of being, a "heavenly being," or a "literal angel." What we are saying is that Brother Felix Y. Manalo is the fulfillment of the "other angel" prophesied in Revelation 7:2-3.

They misinterpreted or misunderstood our doctrine because of their erroneous understanding or concept regarding the word "angel." For them the word “angel” refers only to “heavenly beings.”

THE TRUE MEANING OF THE WORD “ANGEL”

“The angel answered, ‘I am Gabriel. I stand in the presence of God, and I have been sent to speak to you and to tell you this good news.” (Luke 1:19, NIV)

An angel of the Lord was sent to Zechariah (the father of John the Baptist). This angel said to Zechariah, “I have been sent to speak to you…” the Bible called Gabriel an “angel” not because he is a heavenly being, but because he was SENT by the Lord.

The Greek word translated by many English versions of the Bible as “angel” is the word “aggelos” (the double gamma, the “gg”, is pronounced as “ng”). This Greek word does not mean “a heavenly being” or “a spiritual being” but literally means “a messenger.” Hence, Young’s Literal Translation of the Bible renders Luke 1:19 as follows:

“And the MESSENGER answering said to him, `I am Gabriel, who have been standing near before God, and I was sent to speak unto thee, and to proclaim these good news to thee.” (Luke 1:19, YLT, emphasis mine)

Even “Bible scholars” confirmed that the Greek word “aggelos” literally means “a messenger”:

Thus, the literal meaning of the word “aggelus” which was commonly translated in English as “angel” is “messenger.”

THERE ARE HUMANS THAT WERE
CALLED “ANGELS” BY THE BIBLE

Is the word “angel” exclusive for heavenly beings only as the belief of many people today? The truth is, there are humans that were called “angel” by the Bible:
“And when they went their way, Jesus began to say to the multitudes concerning John: What went you out into the desert to see? a reed shaken with the wind?
“But what went you out to see? a man clothed in soft garments? Behold they that are clothed in soft garments, are in the houses of kings.
“But what went you out to see? a prophet? yea I tell you, and more than a prophet.
“For THIS IS HE OF WHOM IT IS WRITTEN: BEHOLD I SEND MY ANGEL BEFORE THY FACE, who shall prepare thy way before thee.” (Matthew 11:7-10, Douay-Rheims, emphasis mine)

Referring to John the Baptist, the Bible said, “Behold I send my angel before thy face.” It is clear here that John the Baptist was called an “angel” of the Lord. Take note that Douay-Rheims Bible is a Catholic version.

In many English versions of the Bible, the word they used is “messenger.” However, in the Greek text of Matthew 11:10, the word used is “aggelon”:

TESTIMONIES OF CATHOLIC AUTHORITIES
REGARDING THE WORD “ANGEL”

Catholic authorities testify that the word “angel” denotes not the state of being but the office of the one being sent by God:

“They are called ‘Angels,’ from a Greek word which means messenger. The word ‘Angel,’ therefore, does not  express the nature of these spirits, but rather the offices…” (Crock, Clement H., Discourses on the Apostles’ Creed, p. 72.)

Thus, the word “angel” was used by the Bible referring both to heavenly beings and human beings who were sent by God. The word literally means “messenger” and does not denote the nature but the office of the one sent by God.

THE USED OF THE WORD “ANGEL”
BY THE BOOK OF REVELATION

“Then I looked, and I heard the voice of many angels around the throne, the living creatures, and the elders; and the number of them was ten thousand times ten thousand, and thousands of thousands.” (Revelation 5:11 NKJV)

“To the angel of the church of Ephesus write, 'These things says He who holds the seven stars in His right hand, who walks in the midst of the seven golden lampstands.” (Revelation 2:1, NKJV)

“Those who are wise shall shine Like the brightness of the firmament, And those who turn many to righteousness Like the stars forever and ever.” (Daniel 12:3, NKJV)

“Angel: the guardian angel of the Church, or the church itself, or, and this is the common view, the bishop of the church. If St. John addresses the bishops, he regards them as the incarnation of their respective churches.” (Footnote of Revelation 2:1, Douay-Rheims)

Thus, the Book  of Revelation used the word “angel” referring both to heavenly beings and human beings.

THE “OTHER ANGEL” MENTIONED
IN REVELATION 7:2-3

Remember that the word “angel” is the translation of the Greek word “aggelos” which literally means “messenger.” This is the reason why Young’s Literal Translation renders Revelation 7:2-3 as follows:

“And I saw ANOTHER MESSENGER going up from the rising of the sun, having a seal of the living God, and he did cry with a great voice to the four messengers, to whom it was given to injure the land and the sea, saying, `Do not injure the land, nor the sea, nor the trees, till we may seal the servants of our God upon their foreheads.” (Revelation 7:2-3, YLT, emphasis mine)

Because the literal translation of the word “aggelos” is “messenger,” thus the “other angel” of other English versions of the Bible was rendered by Young Literal Translation as “other messenger.” Hence, when the Iglesia Ni Cristo (Church of Christ) teaches that Brother Felix Y. Manalo was the fulfillment of the “other angel” mentioned in Revelation 7:2-3, it means that he is the “other messenger” prophesied by Revelation 7:2-3 and NOT that he is a “literal angel,” or a “heavenly being,” or an “angel” in state of being.

Thus, although Brother Felix Y. Manalo was the fulfillment of the “other angel” prophesied in Revelation 7:2-3, however, he is still human in nature, a man, who was sent by God in these last days. Remember that even Catholic authorities testify that the word “angel” does not denote the nature but the office of the one sent by God.

REGARDING OUR BELIEF
ABOUT JESUS CHRIST

Now, regarding the state of being of the Lord Jesus Christ, it is not us who say that He is a man by the Lord Jesus Himself. This is what He said in John 8:40:

“I am a man who has told you the truth which I heard from God, but you are trying to kill me. Abraham did nothing like that.” (John 8:40, NCV)

We believe that the Lord Jesus Christ is a man in nature because this is what He Himself taught us. Now, we reject the belief that Jesus is true God and true man because this contradicts the very words of the Lord God that “God is not a man” and “man is not God”:

“I will not execute the fierceness of My anger; I will not again destroy Ephraim. FOR I AM GOD, AND NOT MAN, The Holy One in your midst; And I will not come with terror.” (Hos. 11:9, NKJV, emphasis mine)

“Son of man, say to the leader of Tyre, 'Thus says the Lord God, ‘Because your heart is lifted up And you have said, 'I am a god, I sit in the seat of gods, In the heart of the seas'; Yet YOU ARE A MAN AND NOT GOD, Although you make your heart like the heart of God.” (Ezek. 28:2, NASB, emphasis mine)

“People of Israel, listen to these words: Jesus from Nazareth was A VERY SPECIAL MAN. God clearly showed this to you by the miracles, wonders, and signs he did through Jesus. You all know this, because it happened right here among you.” (Acts 2:22, NCV, emphasis mine)

We believe that Jesus Christ is the Son of God:

“And when the centurion, who stood there in front of Jesus, heard his cry and saw how he died, he said, ‘Surely THIS MAN WAS THE SON OF GOD!’” (Mark 15:39, NIV, emphasis mine).

We accept Jesus Christ as our Lord:

“So, all the people of Israel should know this truly: GOD HAS MADE JESUS — THE MAN you nailed to the cross — BOTH LORD AND CHRIST.” (Acts 2:36, NCV, emphasis mine)

We accept Jesus Christ as our Savior:

“The God of our fathers raised up Jesus, whom you had murdered by hanging Him on a tree. GOD EXALTED THIS MAN TO HIS RIGHT HAND AS RULER AND SAVIOR, to grant repentance to Israel, and forgiveness of sins.” (Acts 5:30-31, Holman Christian Standard Bible, emphasis mine)

We accept Jesus Christ as the Mediator between man and the one true God:

“For there is one God and ONE MEDIATOR BETWEEN GOD AND MEN, THE MAN CHRIST JESUS” (I Timothy 2:5, NIV, emphasis mine)

CONCLUSION
Thus, when we speak of the state of being (nature) of the Lord Jesus Christ, He is a man as He Himself explicitly said, but when we speak of His attributes, He is “a very special man”: the Son of God, the Lord, the Savior, and the Mediator between the one true God (the Father) and Man.

The Lord Jesus is indeed greater than Brother Felix Y. Manalo, because the Lord Jesus Christ is the greatest messenger of the one true God:

“Jesus spoke these words, lifted up His eyes to heaven, and said: "Father, the hour has come. Glorify Your Son, that Your Son also may glorify You…
“And this is eternal life, that they may know You, the only true God, and JESUS CHRIST WHOM YOU HAVE SENT.” (John 17:1,3 NKJV, emphasis mine)