The True Church Of Christ Has No Pope


THE CHURCH OF THE BIBLE
HAS NO “POPE” 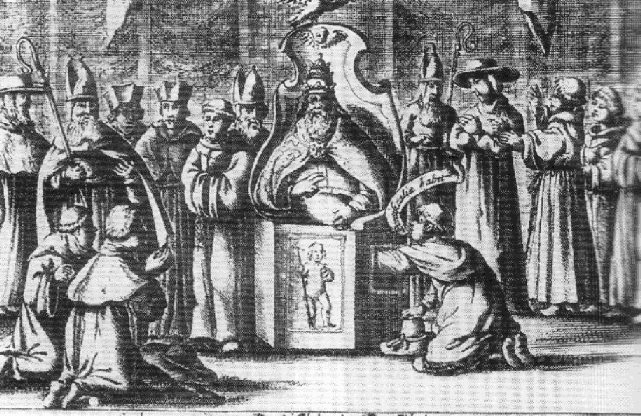 IT IS CLEAR from the Bible that the first century Church of Christ was led by the apostles and assisted by other ministers of the Gospel. Local churches were led by bishops, deacons and even deaconesses. However, nowhere in the Bible we can read that the whole Church was led by a “pope.”

In fact, the Lord Jesus Christ will never establish an office having a title of a “pope” and will never call any of His apostles and disciples as “pope” because He Himself said:

“But you, do not be called 'Rabbi'; for One is your Teacher, the Christ, and you are all brethren. Do not call anyone on earth your father; for One is your Father, He who is in heaven.” (Matthew 23:8-9 NKJV)

Christ explicitly said, “Do not call anyone on earth your father; for One is your Father, He who is in heaven.” The word "pope" means "father." Thus, it is only right to conclude that the Lord Jesus Christ never called and made Apostle Peter as “pope.”

“Now you are the body of Christ, and members individually. And God has appointed these in the church: first apostles, second prophets, third teachers, after that miracles, then gifts of healings, helps, administrations, varieties of tongues. Are all apostles? Are all prophets? Are all teachers? Are all workers of miracles?” (I Corinthians 12:27-29 NKJV)

In Ephesians 4:11-12, Apostle Paul mentioned again the primary offices appointed inside the Church, but still, no “pope”:

“And He Himself gave some to be apostles, some prophets, some evangelists, and some pastors and teachers, for the equipping of the saints for the work of ministry, for the edifying of the body of Christ.” (Ephesians 4:11-12 NKJV)

In the leadership of the local churches, Apostle Paul mentioned the office of the “bishops” and “deacons,” still no “pope”:

“This is a faithful saying: If a man desires the position of a bishop, he desires a good work. A bishop then must be blameless, the husband of one wife, temperate, sober-minded, of good behavior, hospitable, able to teach;
“Likewise deacons must be reverent, not double-tongued, not given to much wine, not greedy for money, holding the mystery of the faith with a pure conscience.” (I Timothy 3:1-2, 8-9 NKJV)

Thus, it is a fact that nowhere in the Bible we can read that the whole Church is led by a “pope,” It is very unlikely that the “office” which is very important and significant to the Roman Catholic Church will never be mentioned in the New Testament, the book containing the history of the first century Church of Christ, while the Roman Catholic Church claims that they are the one true Church, the true Church of Christ.

“The title pope (papa) was, as has been stated, at one time employed with far more latitude. In the East, it has always  been used to designate simple priests. The Western Church, however, it seems from the beginning to have been restricted to bishops (Tertullian, ‘De Pud’  xiii). It was apparently in the fourth century that it began to become a distinctive title of the Roman pontiff...Gregory VIII finally prescribed that it should be confined to the successors of Peter.” (Catholic Encyclopedia, 1913, vol. xii, p. 272.)

At first, the title “pope” was employed with a far more latitude, that it was used to designate simple priests. In seems in the Western Church that from the beginning, the title “pope” has been restricted to bishops. It was apparently in the fourth century that it began to become a distinctive title of the Roman pontiff.