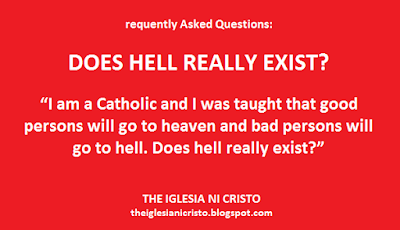 THE LORD JESUS Christ speaks of "hell" where fire never goes out. This is what He says in Mark 9:43:

“If your hand causes you to sin, cut it off. It is better for you to enter life maimed than with two hands to go into hell, where the fire never goes out.” (Mark 9:43 NIV)

There is indeed a hell that according to the Lord Jesus, “where the fire never goes out.” The Bible also calls it Lake of fire:

The "lake of fire" is the "second death" where God will punish those who sinned against Him:

“But the cowardly, the unbelieving, the vile, the murderers, the sexually immoral, those who practice magic arts, the idolaters and all liars-their place will be in the fiery lake of burning sulfur. This is the second death.” (Revelation 21:8 NIV)

Hell is the place of eternal torment. The Bible vividly describes how God will punish the wicked persons in the Lake of fire:

“He, too, will drink of the wine of God's fury, which has been poured full strength into the cup of his wrath. He will be tormented with burning sulfur in the presence of the holy angels and of the Lamb. And the smoke of their torment rises for ever and ever. There is no rest day or night for those who worship the beast and his image, or for anyone who receives the mark of his name.” (Revelation 14:10-11 NIV)


However, hell (the Lake of fire) doesn’t exist yet.


From the Second Coming of the Lord Jesus Christ (cf. II Peter 3:7 and 10), one thousand years will elapse then the Lake of fire will come into being:

“(The rest of the dead did not come to life until the thousand years were ended.)…When the thousand years are over, Satan will be released from his prison  and will go out to deceive the nations in the four corners of the earth-Gog and Magog-to gather them for battle. In number they are like the sand on the seashore.  They marched across the breadth of the earth and surrounded the camp of God's people, the city he loves. But fire came down from heaven and devoured them.  And the devil, who deceived them, was thrown into the lake of burning sulfur, where the beast and the false prophet had been thrown. They will be tormented day and night for ever and ever.” (Revelation 20:5, 7-10 NIV)

According to the Bible, the "rest of the dead" will come to life after the "thousand years," and after that the "lake of fire" will come into being - "fire came down from heaven and devoured them. And the devil, who deceived them, was thrown into lake if burning sulfur, where the beast and the false prophet had been thrown. They will be tormented day and night for ever and ever."

“For the Lord Himself will descend from heaven with a shout, with the voice of an archangel, and with the trumpet of God. And the dead in Christ will rise first. Then we who are alive and remain shall be caught up together with them in the clouds to meet the Lord in the air. And thus we shall always be with the Lord.” (I Thessalonians 4:16-17 NKJV)

After those saved brought up and met the Lord, what will happen next is the destruction of the earth and everything in it and the perdition of ungodly men:

“But the heavens and the earth which are now preserved by the same word, are reserved for fire until the day of judgment and perdition of ungodly men.
“But the day of the Lord will come as a thief in the night, in which the heavens will pass away with a great noise, and the elements will melt with fervent heat; both the earth and the works that are in it will be burned up.” (II Peter 3:7,10 NKJV)

One thousand years after the Second Coming of the Lord Jesus and the First Resurrection, the “rest of the dead” will come to life, but to be “thrown into the lake of burning sulfur" (see Rev. 14:9-11). They will be tormented day and night for ever and ever. Thus, hell (the Lake of fire) doesn’t exist yet, but one thousand years from the Second Coming of the Lord Jesus it will come into being.


What will happen to a person when he dies?


This is what the Bible says regarding the dead:

“Adrift among the dead,  Like the slain who lie in the grave,  Whom You remember no more, And who are cut off from Your hand.” (Psalms 88:5 NKJV)


The dead lies on his grave, and remember no more for the dead’s thoughts perish:

“His breath goeth forth, he returneth to his earth; in that very day his thoughts perish.” (Psalms 146:4 KJV)

When a person dies, his breath cease, he return to earth, and his thoughts perish. Until when the dead will remain in the grave? When will the dead rise to receive judgment? Job 14:10-12 reads:

“But man dies and is laid away; Indeed he breathes his last And where is he? As water disappears from the sea, And a river becomes parched and dries up, So man lies down and does not rise. Till the heavens are no more, They will not awake Nor be roused from their sleep.” (Job 14:10-12 NKJV)

When man dies, according to the Bible, he “lies down and does not rise.” He will not rise to received judgment “Till the heavens are no more, They will not awake Nor roused from their sleep.” The “passing away of heaven” was on the Day of the Lord, the Day of Judgment, the Second Coming of the Lord Jesus Christ (cf. II Peter 3:7, 10).

Who will be saved from the eternal torment,from the Lake of fire?

The most important question to be answered is, “who will be saved from the eternal torment, from the Lake of fire?” this is the answer of the Bible on Romans 5:8-10:

“But God has shown us how much he loves us--it was while we were still sinners that Christ died for us! By his sacrificial death we are now put right with God; how much more, then, will we be saved by him from God's anger! We were God's enemies, but he made us his friends through the death of his Son. Now that we are God's friends, how much more will we be saved by Christ's life!” (Romans 5:8-10 TEV)

Contrary to common belief, the Bible explicitly tells us that the Lord Jesus gave His life for His Church:

This Church is the Church of Christ:

“For just as the human body is one and yet has many parts, and all its parts, many as they are, constitute but one body, so it is with the Church of Christ.” (I Corinthians 12:12 NTME)