The Uniqueness of the Bible

THE UNIQUENESS OF THE BIBLE

The Bible is Indeed the "Book of Books" 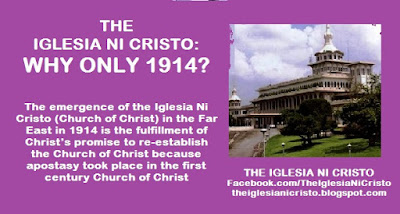 Email ThisBlogThis!Share to TwitterShare to FacebookShare to Pinterest
Labels: About Iglesia Ni Cristo, The One True Church

We Believe That The Bible Is God's Word


“What God Was, the Word Was”
The bible is the word of god

Today we call our Sacred Scriptures “the Bible.” The Bible forms the foundation upon which every teaching and practice of the Iglesia Ni Cristo or the Church Of Christ are built. The Bible-centered method is one of the defining characteristics that make this Church unique.However, the attitude of some more liberal groups concerning the Bible departs even further from the proper reverence that should be accorded the Scriptures, and some who even profess to be Christians, calling the Bible only one of many “sacred texts.”

These same people consider the religious books of other religions, such as those of Buddhism and Hinduism, to be equally valid “expressions of God’s voice” and worthy of equal consideration and respect as the Bible. They consider all the “sacred texts” to be God’s various ways of speaking His truth to man, no matter how much the “truths” these books teach differ from and contradict one another and the Bible.

Still others give the Bible no respect at all, as they try to deconstruct it and attempt to read into the motives of the different writers, assigning them various social and political agendas. For them, there is no such thing as a sacred text. They see the Bible only as a human text that can be analyzed and criticized like any other literary works.

There are those who classify the Bible as a mere collection of myths, that is, something beyond the realm of truth. Others believe that the Bible is a mere work of man and just a product of human imagination.

However, in the Iglesia Ni Cristo (Church of Christ), the Bible is considered indispensable. It is the ultimate authority and guide to the way the Church members think, feel, and act. Why do God’s words written in the Bible hold such power over their lives that they untiringly invite people to listen to and follow His words? The answer to this question rests on the distinctive attribute of the divine word that is also present in God Himself.


WHAT WE BELIEVE AND WHY


Fundamental Teachings, Beliefs and Practices Of The Bible Upheld By The Iglesia Ni Cristo (Church Of Christ)