What They Say About The Iglesia Ni Cristo

What They Say About The
Iglesia Ni Cristo 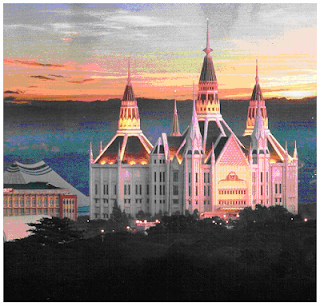 FROM HER HUMBLE beginning, he Iglesia Ni Cristo truly grown into a global Church. Her successes flows like the water in the river, and she spread throughout the world like a wildfire. These did not escape from the eyes of the observers. These are what they say about the Iglesia Ni Cristo (Church of Christ):

“The Iglesia is the true and long dead Church of Christ, quickened to life by the Lord’s own Messenger – Bishop Felix Manalo.”

“Bishop Felix Manalo consistently upheld in his sermons, in the Church congregations, in his utterances in public rallies, and in writings, that he is a mere brother and, in keeping with his commision, teaches nothing of his own but merely converts people into the Church of Christ, and once therein these people should follow and obey that which God commands. This he does, for he seeks only the glory of him that has sent him.”

“Their beloved brother Felix Y. Manalo was mocked and reviled even as he exhorted the ‘kapatid’ to abandon their worldly desires and instead seek the kingdom of heaven.
“But the Iglesia has a way of turning grief into strength. Rather than use force, the church, upon Felix Manalo’s admonition welded themselves into a cohesive whole: one mind, one spirit, and best of all, one vote. The ballot rather than the bullet.”

About the Leadership of
brother Felix Y. Manalo

“Factors Contributing to the Growth of the Movement
“First has been the dynamic leadership of Felix Manalo who dominated for a period of forty-nine years.”

“By the time of his death, April 12, 1963, Felix Manalo Ysagun had already established a rare distinction: he was the only person in any religious sect in history to have held a spiritual ministry of 48 uninterrupted years.”

“The Church of Christ (Iglesia ni Cristo) has developed from the proverbial mustard seed to a full-grown oak since its emergence in 1914 in Punta, Sta. Ana, Manila, under the leadership of Felix Y. Manalo.”

“The Iglesia ni Cristo has shown a phenomenal growth. Starting from Manalo who, in 1914, constructed religious hierarchy of one, the church has grown into a nationwide organization noted for its ornate cathedrals, centrally located chapels and well-knit ministers. A kind of organization like it had never before been known in the Philippines. That Manalo made such an organization possible in the country is remarkable: that he was able to make it a great social force is a tribute to his indigenous aspiration and spiritual leadership…”.”

about the character of
brother felix y. manalo

“All who knew him (Felix Y. Manalo) bear witness to a vigorous, magnetic personality.”

“He exhibited a great quality for leadership and a sincere desire to know the truth. Deep in him was the aspiration to lead a religious life. And to lead others towards the religious life.”

“…Trying his luck as barber, photographer and a hatter. He found sufficient means of comfortable life in his hat enterprise. However, this kind of life did not bring him peace and contentment because he ‘aspired to lead a religious life’.”

About the humble beginning of
the church and her growth

“…Felix Manalo formally started the Iglesia ni Cristo (INC) in a makeshift  bamboo chapel on the blighted fringes of Manila in Punta, Sta. Ana. Manalo’s views on Christianity and his interpretation of the teachings of God were so unorthodox that he and the Church  were ridiculed and mocked upon with scorn by the predominantly Catholic populace. People, even his friends, were skeptical about his ideas on the ‘true church.’ But gallant as he was, Manalo persevered through all the mockery. Patiently, he trained other men to be ministers and established ‘locales’ composed of poor workers and their families.
“Slowly the Iglesia ni Cristo gained recognition and a following that unbelievably spread far and wide, around the country and all the way to the West…”

"The Iglesia ni Cristo (INC) is a significant element today in the religious mosaic of the Philippines. Boasting of several million members...it has seen remarkable growth since its humble beginnings in 1914."

" ... the INC each year dedicates approximately 10O church buildings that bristle with magnificent spires, feature concrete soaring arches, are painted in distinctive pastel colors, and display high standards of maintenance. Enclosed by imposing fences and carefully manicured grounds, each church dominates the local skyline. The imposing sacred structures of this dynamic religion have thus imprinted both urban and rural landscapes of the Philippines."

Reed, Robert, "From local to global: The expanding mission of the Iglesia ni Cristo in the Philippines and throughout the world" Retrieved April 21,2003 from http: //ww.ethnicstudies.
ucsd.edu/html/springlectures.htm

"Yet for all its magnificent temples and imposing edifices and other signs of material wealth, the Iglesia has remained faithful to its mission as the church of the poor. ... its deeds in improving the life of its followers, spiritual and physical, are indelible  tracks in Philippine religious movements."

"Why is it that everytime we get to talking about a strong and well-managed, disciplined and powerful church, we invariably point to the Iglesia ni Cristo? 'We would even heave a sigh and wonder what makes the INC so influential. What makes its members so committed and disciplined that they attend services twice a week without fail?"

Bodegon, Joel L. The Isaiah Paradigm: Recapturing the Role of the Laity, p. 116

"The INC stands out like a rock of  sobriety, unity and nationalism amid the political, and economic turbulence shaking the country today. ..."

the social significance
of the iglesia ni cristo

"The Iglesia ni Cristo (INC) is a significant element today in the religious mosaic of the Philippines. Boasting of several million members..., it has seen remarkable growth since its humble beginnings in 1914."

"'The Iglesia Ni Cristo has indeed set a good example to other church groups and non-government organizations extending assistance to our brothers and sisters in war-torn places Mindanao,' [Bess] Masangkay, who is also the president of the Quota International of Las Pinas, an NGO known  for its various socio-civic services in cities of Muntinlupa and Las Pinas, further stressed."

“Beyond ministering to the spiritual well-being of its members, the lglesia ni Cristo epitomizes and compassion concern even for those outside its fold."
"The Iglesia ni Cristo in Century" Philippines Free Press: 1900-2000 The Philippine Century, pp. 214-215

"Yet for all its magnificent temples and imposing edifices and other signs of material wealth, the Iglesia has remained faithful to its mission as the church of the poor. ... its deeds in improving the life of its followers, spiritual and physical, are indelible  tracks in Philippine religious movements."

"The Iglesia ni Cristo is significant not only in the Philippines. As one of the largest, most powerful and dynamic independent, indigenous churches in the Third World, the Iglesia ni Cristo demands our careful study What is the story of the Iglesia ni Cristo? Can we discover the reasons for its remarkable growth? Why has it been so successful in propagating its teachings in areas where other churches have grown only with great difficulty?  These questions will give direction for this investigation"

Copyright © 2013 by THE IGLESIA NI CRISTO
ALL RIGHTS RESERVED