The Relevance of God's Messenger to Man's Salvation

The Relevance Of God’s Messenger To Man’s Salvation 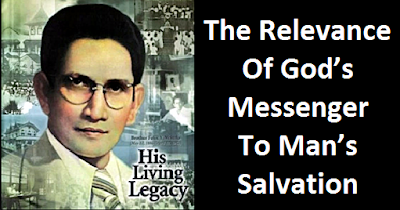 WITH THE EMERGING religious fervor among many people today, the belief that anyone can serve and worship God directly without someone teaching him how to do it properly has also become commonplace. This is bolstered by the notion of some religious quarters that salvation is simply a matter of establishing direct and personal relationship with God and that it could be attained by performing charitable works and by doing good to one’s fellowmen. That possessing good conscience, being religious and godly, and neither trampling on other’s people’s rights nor doing any evil to others make one worthy of God’s favor and His promised salvation. People who adhere to the aforementioned principle often do not recognize the importance and relevance of God’s messenger to their relationship with Him, dismissing the concept of God’s commissioning as superfluous.

Are these people right in discarding God’s messenger in their religious life?


THE STORY OF CORNELIUS

The Bible is replete with instances showing how valuable God’s messengers are to man’s relationship with God and the salvation of his soul. Consider this story of Cornelius, a devout and God-fearing man recorded in the Acts of the Apostles:

“At Caesarea there was a man named Cornelius, a centurion in what was known as the Italian Regiment. He and all his family were devout and God-fearing; he gave generously to those in need and prayed to God regularly. One day at about three in the afternoon he had a vision. He distinctly saw an angel of God, who came to him and said, ‘Cornelius!’  Cornelius stared at him in fear. ‘What is it, Lord?’ he asked. The angel answered, ‘Your prayers and gifts to the poor have come up as a memorial offering before God. Now send men to Joppa to bring back a man named Simon who is called Peter. He is staying with Simon the tanner, whose house is by the sea.” (Acts 10:1-6 New International Version)

From this description, Cornelius was not unlike many people today who are religious and prayerful. He was also kind and charitable to the poor. By human measure, his qualities and good deeds could have very well made him worthy before God and His promised salvation. However, notwithstanding his religiosity and charitable works, something was obviously lacking. Had his commendable traits been enough, God wouldn’t have bothered sending to him an angel telling him what to do. But as what the case, he was instructed by no less than an angel of the Lord to meet Apostle Peter. Why Cornelius had to see Peter despite the fact that an angel from heaven had already appeared and talked to him is explained in this narration:

“Cornelius answered: "Four days ago I was in my house praying at this hour, at three in the afternoon. Suddenly a man in shining clothes stood before me  and said, 'Cornelius, God has heard your prayer and remembered your gifts to the poor.  Send to Joppa for Simon who is called Peter. He is a guest in the home of Simon the tanner, who lives by the sea.'  So I sent for you immediately, and it was good of you to come. Now we are all here in the presence of God to listen to everything the Lord has commanded you to tell us.” (Acts 10:30-33, Ibid.)

The very purpose in sending for Peter was for Cornelius and his household to listen “to everything the Lord has commanded.” Evidently, God’s commandments which Cornelius had receive in order to win God’s favor was not to be preached by the angel from heaven but by Apostle Peter. Thus, in the succeeding verses narrating the event, Peter preached the words of God to them:

“Then Peter began to speak: ‘I now realize how true it is that God does not show favoritism  but accepts men from every nation who fear him and do what is right. You know the message God sent to the people of Israel, telling the good news of peace through Jesus Christ, who is Lord of all.” (Acts 10:34-36, Ibid.)

While Apostle Peter was still preaching, the Holy Spirit came on all who heard the message:

“While Peter was still speaking these words, the Holy Spirit came on all who heard the message.  The circumcised believers who had come with Peter were astonished that the gift of the Holy Spirit had been poured out even on the Gentiles.” (Acts 10:44-45, Ibid.)

After they had heard and had believe in his preaching Apostle Peter ordered that they be baptized:

“Can anyone keep these people from being baptized with water? They have received the Holy Spirit just as we have.  48So he ordered that they be baptized in the name of Jesus Christ. Then they asked Peter to stay with them for a few days.” (Acts 10:47-48, Ibid.)

Cornelius and his household had to meet with Apostle Peter, a messenger of God, and listen to his preaching in order for them and his household to receive the Holy Spirit and the true baptism. Only then did his piety and good works become worthy and acceptable to God. What happened to him proves that men cannot render valid and acceptable service to the Almighty without the benefit of His messenger. Although it is good to perform charitable and commendable acts to our fellowmen, these are not enough to be worthy of God’s favor and His promised salvation. God would consider one’s religiosity and services to Him worthless if they are rendered outside His commissioning.

What did God entrust to His messengers which makes their preaching function indispensable? Apostle Paul’s letter to the Christians in Corinth enlightens us on this regard:

“All this is from God, who reconciled us to himself through Christ and gave us the ministry of reconciliation:  that God was reconciling the world to himself in Christ, not counting men's sins against them. And he has committed to us the message of reconciliation. We are therefore Christ's ambassadors, as though God were making his appeal through us. We implore you on Christ's behalf: Be reconciled to God.” (II Corinthians 5:18-20, Ibid.)

“And how can they preach unless they are sent? As it is written, "How beautiful are the feet of those who bring good news!" (Romans 10:15, Ibid.)

Indeed, without the messenger authorized by God to preach His words, man cannot be reconciled to Him. And herein lies the indispensability of the commissioned preacher in man’s relationship with God.

WHY RECONCILLIATION
TO GOD IS NECESSARY

The need for man to be reconciled to God necessitated the ending of His messengers. This is because man’s relationship with God as severed as recorded in Isaiah 59:2:

“But your iniquities have separated you from your God; your sins have hidden his face from you, so that he will not hear.” (Ibid.)

Man was separated by God on account of his sins and iniquities. Moreover, because of man’s evil deeds he also became God’s enemy. Apostle Paul’s points out:

“At one time you were far away from God and were his enemies because of the evil things you did and thought.” (Colossians 1:21, Today’s English Version)

But the evil effect of man’s sins before God is far reaching. It does not end with his separation from God and becoming His enemy. Man is also placed under the curse of the law which requires him to pay for his sins. According to the Bible, the wages of sin is death:

The full payment for sin is the second death in the lake of fire:

Thus, man needs to be reconciled to God to be removed from the precarious condition of being considered God’s enemy and under the curse of the law. However, his reconciliation to God cannot be effected without the benefit of a messenger commissioned to preach to him the words of reconciliation. Thus, says the messengers of God:

“We are therefore Christ's ambassadors, as though God were making his appeal through us. We implore you on Christ's behalf: Be reconciled to God.” (II Corinthians 5:20 NIV)

On that note, those who dismiss as superfluous the role of God’s messengers play in man’s salvation should reconsider their position. What the true messengers of God preached in order for man to be reconciled to God and inherit His promised salvation, is that one needs to belong to the Church preached by the messenger of God. As Apostle Paul aptly points out, thus:

“And this is the secret: that the Gentiles will have their full share with the Jews in all the riches inherited by God's sons; both are invited to belong to his Church, and all of God's promises of mighty blessings through Christ apply to them both when they accept the Good News about Christ and what he has done for them.” (Ephesians 3:6, The  Living Bible)

And this Church that true messengers of God preached, like Apostle Paul, is the Church of Christ:

“Take heed therefore to yourselves and to all the flock over which the Holy Spirit has appointed you overseers, to feed the church of Christ which he purchased with his blood.” ( Acts 20:28, Lamsa)

The Church of Christ in these last days firmly believes that God has commissioned a messenger in our time in the person of Brother Felix Y. Manalo. Numerous biblical prophecies concerning God’s commissioning of a messenger in these last days have found fulfillment in him (Rev. 7:2-3; Is. 41:9-16; Is. 46:11-13; Is. 43:5-6; and John 10:16). Through his preaching function that resulted in the reestablishment of the Church of Christ in the end times, people in these last days have been given the chance to be reconciled to God. Those who believe in the teachings of God which the messenger preached and as a result become members of the Church of Christ are reconciled to God and are certain to inherit his promised salvation come Judgment Day. For, after all, to share in God’s inheritance , one needs to belong to the preached by the messenger of God.