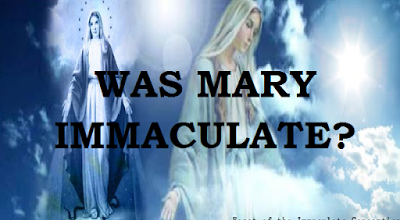 NOTE:
Let no one be mistaken that we have anything against Mary, the mother of the Lord Jesus. This article is not an attack against Mary, but instead, we intend to protect the mother of our Lord Jesus Christ from lies surround her today taught by the Catholic religion. We are exposing the false teachings of the Roman Catholic Church about Mary, the mother of our Lord Jesus, because according to the Bible those who adhere “false teachings” will not enter the kingdom of God (cf. Gal. 5:19-21).

THE CATHOLIC CHURCH has compiled a lot of teachings on Mary, the mother of our Jesus Christ. So numerous are the titles given to her, representative of the many teachings that have been developed around her through the centuries. Thus, the rise of Mariology, the theology that deals with the presentation of the Marian theological themes.

One Catholic dogma on Mary is that known as the Immaculate Conception. Many devotees believe in this dogma without even knowing what it really meant. Thus, this Catholic dogma is one of the popular Marian theological themes that has been misunderstood yet readily accepted by many without careful investigation. Others suppose that this refers to the birth of the Lord Jesus when it refers to the birth of Mary instead. That Mary was born sinless.

This teaching was proclaimed a dogma of the Catholic Church on December 8, 1854, by Pius IX, in the bull, Ineffabilis Deus.

WHO SAID THAT MARY WAS BORN SINLESS?

What follows is an excerpt of the document that defines this Catholic dogma, as stated in the Vatican Council:

“…we, with the authority of our Lord Jesus Christ, the blessed Apostle Peter and Paul, and with our own, do declare, and pronounce and define that the doctrine which holds that the Virgin Mary was, in the first instant of her conception, preserved untouched by any tint of original guilt, by singular grace and privilege of Almighty God, in consideration of the merits of Christ Jesus the Savior of mankind-that this doctrine was revealed by God and therefore is to be firmly and steadfastly believed by all faithful…” (Documents of the Christian Church, p. 271)

We strongly disagree to this teaching and further assert that it is a lie. We also intend to protect the mother of our Lord Jesus Christ from such lies taught by the Catholic religion. We consider this dogma as a lie for these reasons:

(a)  the Holy Scriptures are silent about this teaching;
(b)  the Catholic Church Fathers themselves disagree on the matter;
(c)  such teaching defies reason;
(d)  this teaching rests only on Catholic tradition at its best; and
(e)  it goes against the expressed teachings of the Bible.

We will explain these one after the other.

THE SCRIPTURES ARE SILENT

No amount of searching into the Holy Scriptures will be able to yield any single scriptural text that supports the dogma of the Immaculate Conception. The Bible is silent and says nothing about a woman who was born without original sin (assuming that there is such a kind of sin) and who had lived a sinless life. Thus, the admission of Catholic authors that:

“No direct or categorical and stringent proof of the dogma can be brought forward from Scripture…” (The Catholic Encyclopedia, s.v. “Immaculate Conception”).

Although they are aware that “…scripture makes no direct reference to Mary’s conception,” however, “Some hold that her absolute sinlessness is referred to in Gen. 3:15: ‘I will put my enmity between you and the woman, between your seed and her seed: he shall crush your head, and you shall lie in wait for his heel” (Ibid.)

Genesis 3:15, however, does not prove this dogma. This verse plainly and obviously does not say anything of the dogma. Despite this, they insist on the dogma of Immaculate Conception:

“The gospels do not say anything about this. However, we feel justified in thinking that Mary’s love for God and neighbour never knew any uncertainty or failure.” (Marian Handbook, p. 45)

This is plain and simple Catholic authorized conjecture. They “feel justified in thinking that Mary’s love for God and neighbour never knew uncertainty or failure.” Well the Bible does not say so.

This explains why the early theologians of the Catholic Church disagreed on the matter. In fact, they had debated on the question of whether Mary, the mother of Jesus Christ, was conceived without any stain of “original sin” for centuries.

“Anselm held that the Virgin was conceived and born in sin (Cur deus homo ii 16); Bernard that she was conceived in sin but sanctified before birth (EP. CLXXIV 58); Dominicans followed Aquinas (S. T. III xxvii, 1, 2) in agreeing with Bernard; Duns Scotus (Sent. III, iii, 1) and the Franciscans argued for the sinless conception…The promulgation of the dogma was one of the fruits of the Ultramontanism, encouraged by the restored Jesuits, which in the pontificate of Pius IX produced also the Syllabus of Errors and the Decree of Infallibility.” (Documents of the Christian Church, p. 271)

Tertullian and Clement of Alexandria tenaciously espoused opposite views on the “sinless conception” of Mary:

“…Tertullian rejected the idea while about the same time Clement of Alexandria accepted it from the Apocrypha.” (Theotokos, p. 361)

Note that Clement of Alexandria drew his conviction from the spurious Apocrypha rather than from the authentic Bible. St. Albert the Great (before 1200-1280), Doctor of the Church who is remembered as teacher of St. Thomas Aquinas, “denied the Immaculate Conception, since it was condemned by Blessed Bernard in the letter to the Lyonnese and by all the masters of Paris.” (Ibid., p. 10)

Origin and his followers regard Mary as holy but not absolutely sinless:

“The earliest Church Fathers regarded Mary as holy but not as absolutely sinless. Origin and some of his followers assumed that she had been imperfect like other human beings” (New Catholic Encyclopedia, s.v. “Immaculate Conception”).

Church fathers of the East like, John Chrysostom, held that Mary was sometimes guilty of such minor defects:

“…Some oriental writers, including Chrysostom, held that Mary was sometimes guilty of such minor defects as vanity, as when she urged Jesus to work the miracle of changing water into wineat Cana.” (The Catholic Catechism, p. 159)

The absence of agreement among the early theologians of the Catholic Church and the centuries-old debates on the matter only prove that the dogma is not founded on the teachings of the Holy Scriptures. For this they had had to reply on their reasoning and imagination.

The “cult of Mary” has indeed taken a long time to develop. Thus the doctrine that Mary was born sinless – the Immaculate Conception – was promulgated only in the year 1854 after centuries of fiery debate especially between the Franciscans and the Dominicans (The Story of the Church, p. 70).

UNREASONABLENESS OF THE DOGMA

Let us assume that “the Virgin Mary was, in the first instance of her conception, preserved untouched by any tint of original guilt…in consideration of the merits of Christ Jesus the Saviour of mankind…” That means, the sinless nature of Mary’s Son, Jesus Christ, proceeds from His mother’s supposed sinlessness.

It follows from this line of argument that for Mary to be sinless like Christ Jesus, she must have a sinless mother and for her mother to be sinless, she must have a sinless grandmother, and so on and so forth, ad infinitum, or, backwards to Eve. Is this not an absurd teaching? Thus, such dogma (Mary was born sinless) contradicts the very principle they uphold (their dogma of the “original sin”).

Indeed, such reasoning of the Catholic Church defies the sharpest logical sense.

Let no one be mistaken, however, that we have anything against Mary, the mother of Jesus. We only would like to protect her from the lies that surround her today and through which the Catholic Church has been gaining material wealth.

THIS TEACHING RESTS ONLY ON CATHOLIC TRADITION

The truth is, the dogma of the Immaculate Conception of Mary rests only in tradition and does not in any way rest on firm foundations, on the teachings of the Bible.

“The clear emergence of the idea in Tradition dates from the fourth century.” (Theotokos: A Theological Encyclopedia of the Blessed Virgin Mary, p. 180)

And, it was at the middle of the 19th century when such teaching was pronounced and defined:

“The proclamation of the dogma of the Immaculate Conception on December 8, 1854, represented a distinct triumph for the Ultramontones, as the whole affair was deliberately staged to dramatize the authority of the Holy Fathers, who  read the decree with the bishops looking on as simple spectators.” (A Concise History of the Catholic Church, p. 300)

THE TEACHING OF THE BIBLE

The Bible defines sin as the breaking of the law of God. Apostle John, in the first epistle defined sin as follows:

I John 3:4 NIV
“Everyone who sins breaks the law; in fact, sin is lawlessness.”

To sin, therefore, is either by actively doing something against the commandment of God or by simply being passive to what God commands us to do. Thus, one can either be guilty of a sin of commission or a sin of omission. This further teaches us that no sin can be committed by anybody who has not done either the sin of commission or the sin omission.

Even the Apostle Paul and Peter, from whom the Catholic Church claims to have received authority in the pronouncement of the Immaculate Conception contradict this Catholic teaching. In the very words of Apostle Paul, Mary, the mother of the Lord Jesus Christ, was not exempted:

Romans 3:23 NIV
“for all have sinned and fall short of the glory of God”

The only human being who has not committed any sin is our Savior, Jesus Christ:

I Peter 2:21-22 NIV
“To this you were called, because Christ suffered for you, leaving you an example, that you should follow in his steps.  He committed no sin, and no deceit was found in his mouth.”

God is the Savior through our Lord Jesus Christ (cf. Jude 1:25). So, Just the same, Mary needs her Son, Jesus Christ, to save her.

Therefore to the question, “Was Mary immaculate?” the best answer we could give is the teaching of the Holy Scriptures. The Bible says all have sinned with the exception of our Lord Jesus Christ.