Who created Satan, the Devil?


“What is the purpose of God in creating Satan? If God is a God of love, why did He created such an evil being?” 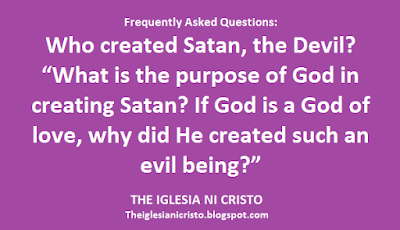 GOD DID NOT create evil. He did not create the devil. What He created was a guardian cherub included among His holy angels:

“You were anointed as a guardian cherub, for so I ordained you. You were on the holy mount of God; you walked among the fiery stones. You were blameless in your ways from the day you were created till wickedness was found in you.” (Ezek. 28:14-15, NIV)

The “anointed cherub” was created as blameless and perfect, until wickedness was found in him. Seeing his perfection, the “anointed cherub” turned against God and aspired to be like the Most High. The Almighty, seeing the arrogance and pride of the cherub, cast him down to earth:

“ How you have fallen from heaven, O morning star, son of the dawn! You have been cast down to the earth, you who once laid low the nations! You said in your heart,’I will ascend to heaven; I will raise my throne above the stars of God; I will sit enthroned on the mount of assembly, on the utmost heights of the sacred mountain. I will ascend above the tops of the clouds; I will make myself like the Most High’.” (Is 14:12-14, NIV)

The once “anointed cherub” was cast down to earth and became “Satan” – God’s adversary:

“So the great dragon was cast out, that serpent of old, called the Devil and Satan, who deceives the whole world; he was cast to the earth, and his angels were cast out with him.” (Revelation 12:9 NKJV)

Thus, what was once the “anointed guardian cherub” – a perfect creation – is now the devil or Satan. The Bible also refers to Satan as the “great dragon” or “serpent” who deceives the whole world (cf. Rev. 12:9). He is the father of lies who “walks about like a roaring lion” seeking for victims to devour (cf. Jn.8:44; I Pt. 5:8-9).

Therefore, God did not create Satan.  Rather,  it was the cherub that consequently became Satan after going against the Almighty God.
Click here to go to MAIN MENU of Frequently Asked Questions