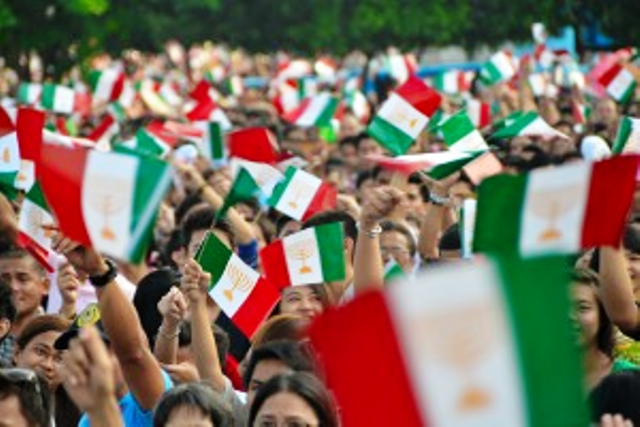 A year ago, in the same summer month of April, Brother Eduardo V. Manalo launched “Kabayan Ko, Kapatid Ko” or “My Countrymen, My Brethren,” a project meant to reach and serve more people worldwide, not only by helping out in their material needs, but also by preaching to them the “truth” about salvation as written in the Bible.

In the said project, the usual grand evangelical mission of the INC called GEM or “Pamamahayag” was combined with another regular charitable activity of the Church which is a medical-dental and relief distribution service mission known as “Lingap sa Mamamayan” or “Aid to Humanity.”

Separately, these two major activities – the “Pamamahayag” and the “Lingap sa Mamamayan” — had been done from the very start by the INC which will be celebrating its Centennial this July 27.

From the initial 10,000 who first heard the “message of salvation” through the first “Kabayan Ko, Kapatid Ko” on April 13, 2013 in Binondo, Manila,  the number of people who heard God’s words through this undertaking had now reached 50 million people worldwide.

At the start of his homily, Brother Eduardo V. Manalo said that the success of the Iglesia Ni Cristo project was God’s handiwork. He said 50 million people were able to hear God’s words detailing the divine instruction as written in the Bible on how man can attain salvation in the first year alone of “Kabayan Ko, Kapatid Ko”.

He thanked the INC members who were moved by the Church’s campaign on intensive propagation, saying they were all a part of the project’s success because they allowed themselves to be “instruments” so that the biblical truth about salvation could reach more people.

Brother Manalo said the day of judgment is drawing near and it was utterly important for people to be at a condition worthy of salvation on that fateful day. And he said this can only happen if they have faithfully followed “God’s instructions” as written in the Bible.

Brother Manalo further explained:  “Ang layunin natin ay hindi upang makapanakit ng damdamin, kundi ipaalam ang katotohanan kaya nga natin binabasa mula sa Biblia. (Our intention is not to hurt people’s feelings but to let them know the truth,  that is why we are only reading from the Bible.)

After an hour, the worship service ended with a fervent prayer that further served as “spiritual nourishment” to the huge crowd that had travelled from different places just to attend the special gathering.

After the worship service, Brother Glicerio B. Santos, Jr., the Iglesia Ni Cristo General Auditor, announced that this May alone, the “Kabayan Ko, Kapatid Ko” will be conducted in 11 more sites, including one abroad. These are in Iloilo, Palawan, Pangasinan, Davao, Samar, Bataan, Oriental Mindoro, Bacolod, Nueva Ecija, Calamian. Outside the country, the same activity will also be held in Hong Kong.