Know the whole truth:
THEY USED KA ERDY’S NAME FOR THEIR PERSONAL GAIN

Angel and Marc took advange of KA ERDY’s situation in 2009 in establishing the SCHUTZENGEL TELECOM, but their father has no knowledge and has nothing to do with it 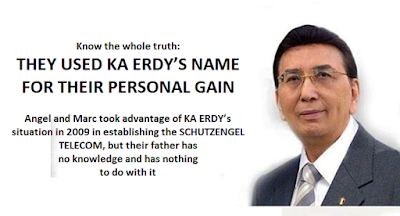 
REMEMBER RA 9857? This legislative franchise was given to Schutzengel Telecom by Philippine Congress in July, 2009 and signed by the then President of the Philippines in December, 2009.

But did KA ERDY tolerated his sons, Angel and Marc, in establishing this elecom business? The truth is, if this came to the knowledge of Brother Erano G. Manalo he will surely not going to tolerate this because he will not tolerate any violation of the “Code of Ethics of the Ministers of the Church” (Ministerial Ethics). It is explicitly stated in the Ministerial Ethics that a minister of the Gospel must devote his whole life to the ministry and must not implicate himself in anything which has nothing to do with the holy ministry, with the activities of the CHURCH, and with the instructions to him of the CHURCH ADMINISTRATION.

THEY ONLY USED THE NAME OF THEIR FATHER,
BUT KA ERDY HAS NOTHING TO DO WITH IT

TAKE NOTE THAT SCHUTZENGEL TELECOM WAS ESTABLISHED IN 2009! KA ERDY passed away in August, 2009. It is reported that KA ERDY was already bedridden during this time.

They  cannot established their telecom business before 2009 because KA ERDY will not allow them. KA ERDY still managed to officiate worship services in 2007, and we still having news of him deciding on important matters and having little activities in 2008. But, KA ERDY has totally no public appearance and not any news about him in 2009. This was the time Tenny, Angel, Marc and Lottie totally hide KA ERDY from the public, even with KA EDUARDO and the Sanggunian. Angel and Marc posting themselves as “personal secretaries” of KA ERDY, that all messages for KA ERDY will be brought to him through Angel and Marc, and (as they claim) all instructions of KA ERDY will be relay by them. This is testified by their “punong tagalaglag” (“chief squealler”), Joy Yuson”:

English translation:
“Ka Erdy has no plan of constructing PA (Philippine Arena) because Ka Angel and Ka Marc knows it because he was the pesonal secretaries of Sir during that time.”

So, Ka Erdy has no knowledge of the establishment of the Schutzengel Telecom. Angel and Marc took advantage of situation when KA ERDY was already weak and bedridden. They used his name to lobby in congress the ratification of the legislative franchise for Schutzengel Telecom.
INDEED, ANGEL AND MARC USED HIS NAME AND THE NAME OF THE CHURCH FOR PERSONAL GAIN.

I Timothy 6:10 NIV
“For the love of money is a root of all kinds of evil. Some people, eager for money, have wandered from the faith and pierced themselves with many griefs.”