Why are there other "Church of Christ"?


WHY ARE THERE OTHER
“CHURCH OF CHRIST”? 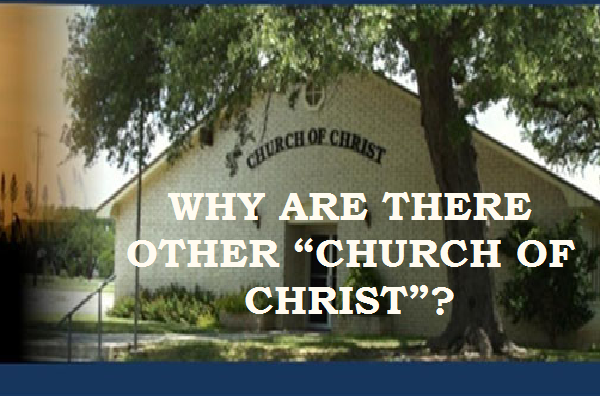 These three denominations have the same root, the Stone-Campbell movement of the 19th century.

Barton Warren Stone was ordained as Presbyterian pastor in 1798. In 1803, he left Presbyterianism, and with four other Presbyterian friends, they founded the Independent Springfield Presbytery. However, it was dissolved in 1804. The congregations continued under the name “Christians” and each one was independent with each other (Westminster Dictionary of Church History. Edited by Jerald C. Brauer. Philadelphia, Pennsylvania: Westminster Press, 1971, p. 790).

ALEXANDER CAMPBELL AND
THE “REFORMERS”

In 1809, Alexander Campbell went to America to accompany his father, Thomas Campbell, who arrived in America two years earlier. Soon after his arrival, they established the Christian Association of Washington, Pennsylvania.  In 1811, they organized their group as a church and choose Alexander Campbell as their pastor. They called themselves as “Reformers” (Ibid., p. 152). In 1813, these “Reformers” merged with the Regular Baptist, but separated in 1820s (Ibid.).

In 1832, the “Reformers” of Alexander Campbell and the “Christians” of Barton Stone merged and called their newly established denomination as “Disciples of Christ”:

“In 1832 the Christians and the Disciples merged, both names are still used, but usually and officially the body is known today as The Christian Church (Disciples of Christ).” (Mead, p. 80.)

In their general convention of 1849, the Disciples of Christ established the American Christian Missionary Society and other general boards. These started a division in their church:

The Disciples of Christ were divided into “progressives” and “conservatives.”

“The schism was acknowledged in the Federal Religious Census of 1906, which listed Churches of Christ separately from the Disciples of Christ.” WDCH, p. 269.)

“Among mainstream Disciples, new tension polarized around rival journals. In opposition to comity, open membership (acceptance of baptized Christians from other communions without immersion), and liberalism, the more conservative group formed the North American Christian Convention in 1927.” (Ibid.)

In 1969, the Disciples of Christ and the North American Christian Convention officially separated, and the latter officially called themselves “the Christian Church and Churches of Christ.”

The engrossing theme of the Stone-Campbell movement is “Christian unity”:

“The doctor, for instance observes that the character of anything is to be judged by that which gave it birth, and then says, ‘This reformation was born of the love of union, and Christian union has been its engrossing theme.’” (Ibid., p. 4)

The “Christian union” they referred to as the engrossing theme of the Stone-Campbell movement is to unite the Christians in all the sects”:

“It is our intention that the reader will come to see these pioneers who launched a movement ‘to unite the Christians in all the sects’ as people and not simply founders of a new church.” (Ibid., p. 1)

Although the engrossing theme of the Stone-Campbell movement is “to unite the Christians in all the sects” but they end up n divisions and the establishment of three factions (denominations):

“As irony has often has its way in history, these men did start a new church, even though was not their intention. Even more ironical is that their unity effort resulted not only in one church, but eventually in three churches, usually identified as Christian Churches (Disciples of Christ), Christian Churches, and Churches of Christ, and there are subgroups within these, especially among the latter. This book tells the story of how all these happened, a kind of travesty in history, that the only church ever in the entire history of Christianity with the express purpose of uniting all believers would itself become so divisive.” (Garret, pp. 1-2)

The book quoted is a history of the Stone-Campbell movement written by their own member. Thus, they admitted, ironically, they don’t have any intension of establishing a church but they did. Still ironical, they call for unity but end up in establishing three churches. And more ironical is that they are against “secularism” but eventually resulted establishing three denominations. This book also admitted that there are subgroups within these three churches, especially among the one called “Churches of Christ.”

Thus, although they are calling themselves as “Church of Christ,” but in truth, they are not really “Church of Christ” but locale congregations or part of either of the three denominations that sprang up from the Stone-Campbell movement.

What make us more certain that they are not true Church of Christ? This is what the Bible says about division and schism:

“This wisdom is not `a wisdom' that cometh down from above, but is earthly, sensual, devilish. For where jealousy and faction are, there is confusion and every vile deed.” (James 3:15-16 ASV)

The Bible also tells us that strife and divisions (schism and factions) are fleshly:

Those “in the flesh” are not of Christ:

“But ye are not in the flesh but in the Spirit, if so be that the Spirit of God dwelleth in you. But if any man hath not the Spirit of Christ, he is none of his.” (Romans 8:9 ASV)

Email ThisBlogThis!Share to TwitterShare to FacebookShare to Pinterest
Labels: About Church of Christ, About the Church, The One True Church