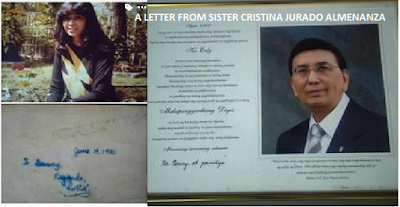 [This is a letter published in the timeline of her FB account.
Sister Cristina was a cousin of Angel Manalo's father-in-law]
With Tagalog Translation below

This post has been drafted more than a month ago, but as Lolanidora always says: “Sa Tamang Panahon (In the Right Time)”, and I truly devoted prayers to finish this so that I will not cause any harm, or sin to anyone. But if I will cause such, I am already expressing my deepest apologies.

So I believed today is the “Tamang Panahon” to share this important insight, especially that today is the birthday of one of the most important persons in my life, our beloved INC Executive Minister, Bro. Eduardo V. Manalo (Ka EVM).

It is written in the book of James 3:13-18 New Living Translation Bible:

True Wisdom Comes From God
13If you are wise and understand God’s ways, prove it by living an honorable life, doing good works with the humility that comes from wisdom. 14But if you are bitterly jealous and there is selfish ambition in your heart, don’t cover up the truth with boasting and lying. 15For jealousy and selfishness are not God’s kind of wisdom. Such things are earthly, unspiritual, and demonic. 16For wherever there is jealousy and selfish ambition, there you will find disorder and evil of every kind.
17But the wisdom from above is first of all pure. It is also peace loving, gentle at all times, and willing to yield to others. It is full of mercy and the fruit of good deeds. It shows no favoritism and is always sincere. 18And those who are peacemakers will plant seeds of peace and reap a harvest of righteousness.

In my own opinion, Bro. Eduardo V. Manalo is the true manifestation of a person who has wisdom that comes from God, as what Verse 17 stated.

Personally, I do not intend to throw stones to those who are criticizing the Executive Board of INC. I am doing this through my own heartfelt desire and no one forced me or bribed me for this disclosure. I only wanted to share such important accounts that occurred during the already weakening days in the life of our late Executive Minister, Bro. Eraño G. Manalo (Ka Erdy), which I am praying and hoping would somehow enlighten the fallen angels, Kelly Ong, especially those INC brethren who were blinded.

In one of the very few instances that Ka EVM opened up to a minister assigned at INC Central, whose wife is a close cousin of mine, Ka EVM shared that even when he was still the Deputy Executive Minister, he believed that some of his siblings were already not in favor of him being assigned as such. He had many projects and suggestions which were somehow being intercepted by his two brothers, because during that time, they were acting as secretaries of Ka Erdy.

Ka EVM also mentioned that the STF which he formed and was honored by Ka Erdy is not the group who are against the leadership of Ka Erdy, but it was the group called NewGen. (http://www.network54.com/Forum/70213/search…).

Unfortunately, Ka Erdy was misled by some of his family members to believe that STF is already recognizing Ka EVM as the current Executive Minister, which is not true and baseless.
There was an instance in one of the Friday Dinners of the family of Ka Erdy when Ka Tenny, the wife of Ka Erdy asked him to give Ka Mark Manalo the opportunity to be the Deputy Executive Minister in placed of Ka EVM, and she also asked Ka Erdy to place Ka Angel Manalo as head of the Finance. But Ka Erdy was firm in his answer that time that Ka Angel and Ka Mark were not trained and molded to handle such important positions.

The issue about the marriage of Ka Gemma, one of the daughters of Ka EVM, with Ka Jojo de Guzman was blessed by Ka Erdy because from the start, Ka Erdy’s advice to Ka Gemma was to conduct devotion (panata) about their marital union and Ka Erdy said that he will also make his own devotion for that. In one of the gatherings of their family, Ka Erdy even suggested to conduct a survey between them to identify who were in favor of the marriage of Ka Gemma and Ka Jojo, and Ka Erdy was the first one to raise his hand, which surprised those who were against such union, so they just followed by also raising their hands.

In one of the most important occasions where the presence of Ka EVM was necessary, that is, when Ka Erdy was terribly ill and very weak, Ka EVM was not given the chance by Ka Tenny to visit, see or even spoke to Ka Erdy. Whenever Ka EVM requested Ka Tenny for a visit with Ka Erdy, she will say that Ka Erdy doesn’t want to see him, which I personally believed that Ka Erdy will never do. That is why, when I was watching the Felix Manalo movie, on the scene in the hospital when Ka Felix spoke to Ka Erdy, I truly cried a lot because such rare chance was not experienced by Ka EVM himself during the passing away of his father. It is a very sad truth that Ka EVM was the last person in their family to know that Ka Erdy already passed away. I believed that if it is true that there was misunderstanding (tampuhan) between Ka Erdy and Ka EVM, Ka Tenny as a wife, as a mother, and more importantly as the light of their household, could have been instrumental to reconcile the two. I cannot imagine what kind of spirit would have yielded the heart of a mother to deprive his son of that last chance to bid farewell to his dying father, one whom he had grown up with, and whom he idolized for his religious greatness.

In one of the issues raised by Kelly Ong about the order of Ka EVM to close the Tabernacle where Ka Erdy’s body was laid, this was ordered because the place is being used by Ka Tenny to gather some brethren to express her disappointments and grief which Ka EVM believed would somehow weaken the spirit of those who will hear such lamentations. Ka EVM felt that time that his mother should already move on because Ka Erdy is already at peace. When the husband of Ka Lotie passed away, the Tabernacle was offered by Ka EVM for the burial wake, but Ka Lotie refused claiming that the Tabernacle will be used for the BEM graduation and opted to use Arlington memorial Home instead. My cousin and her family had a chance to visit such wake, and when they hand-blessed with Ka Tenny, Ka Tenny mentioned: “Dapat tayo ay nagkakaisa bilang pamilya.” Such statements did not bring good vibe and really caused scare to them which led them to leave the place in an instant.

To us who are ordinary members of the INC, it is truly a sad thing to hear and know that Ka Tenny, Ka Lottie, Ka Angel and Ka Mark were separated to our Church, but this was even more hurtful to Ka EVM because this is his beloved mother, sister and brothers. But I know that the Executive Minister’s only will is that his mother, sister and brothers turn back to God’s path, to stop the acts of Joy Yuson, who continuously wanted to cause division to INC. Like their issue on the wall of Jezebel, this will not be ordered without a valid reason. There was a security report that someone was telescoping through a high-powered firearm and looking to the house of Ka EVM.

I do not know if my cousin would approve this revelation which she entrusted to me to be kept, but I am so hurt and troubled already of what is happening to INC. I am well-raised by my Inang, Lola Abe, a well-known provider and caregiver of BEM students when she was alive, and my father & mother under the teachings of God and INC, and because of this, I matured with deep INC faith and with holy fear of God. My family’s richness is defined by good character, pure heart and by saying the words of Truth. I know that with this, I will be attacked and exposed through the social media, like what the Executive Board and their families are experiencing, but I will not be in fear for I am being protected by the Almighty God, the Creator of Heaven and Earth.

I have attached here pictures I have treasured – when my brother died (Ka Lotie’s schoolmate at UP Diliman) at a very young age due to brain tumor and a picture from Ka Tenny commemorating the 1st death anniversary of Ka Erdy, Thank you note from Ka Tenny (which I misplaced when we transferred residence) because I truly adore and love the family of Ka Erdy and I will not intently cause harm to them.

As it was my belief that Ka EVM manifests the person described in the early part of my insight which is stated in James 3:17 – full of mercy and fruit of good deeds; shows no favoritism and is always sincere, Ka EVM has shown this when my cousin, Kuya Mario Wong (father-in-law of Ka Angel) and his family, is continuously living, and being taken care of at the compound of INC even though they are not employees or serving any office of INC Central.
I am sending my heartfelt and sincere message to Ka Tenny, Ka Lotie, Ka Angel and Ka Mark to influence and advise the group of Joy Yuson and Roel Rosal to stop and turn back to the Light and to God. I know, and you all know that Ka EVM is not a bad son and brother. Family should always stand as family. Ka Tenny should not forget the fact that Ka EVM is also her son and Ka Erdy’s, and Ka EVM is our current Executive Minister, whom I could say that almost 99% of the INC members truly love and support.

I know, Ka Tenny, that in the deepest part of your heart, you are aware of the true goodness of Ka EVM and how he really love the INC Church to continue the legacy left by his Lolo, Ka Felix, and his father, Ka Erdy.

I am saddened by the fact that I was barred to give comments on the social media page of Kelly Ong, but my only intention is to share the truth and cause no harm especially to the family of Ka Erdy. I believe this is also the feeling of majority of the INC brethren who want reconciliations to happen, so that the INC Church who have been handheld and helped by God to stand to more than 101 years will not suffer the same fate of that of the first Church who turned back to God.

Let us all renew our old ways (magbalik-loob), ignite again the flame of serving God, because we all know that there exist no more salvation but only inside the Iglesia Ni Cristo sa Huling Araw.