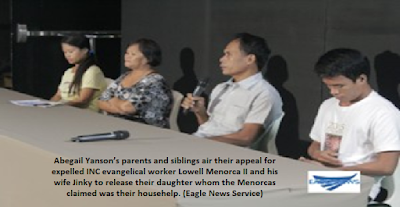 PARENTS OF ABEGAIL YANSON
APPEAL TO MENORCA TO RELEASE
THEIR DAUGHTER

Eagle News) — The parents of Abegail Yanson, the alleged househelp of expelled Iglesia Ni Cristo evangelical worker Lowell Menorca II and his wife Jinky, have asked the Menorcas to release their daughter immediately.

Candido Yanson Jr., and Roselie Yanson, father and mother of Abegail, asked the Menorcas not to hold on to their daughter who was not really working for them as “househelp.”  They said the Menorcas brought their daughter along with them to Manila in mid-July and refused to release her.  They said Abegail was brought along by the Menorcas from Butag, Bulan, Sorsogon — where Lowell was initially assigned as an evangelical worker of the INC – to Manila without their consent.

The Yansons, who came all the way from Bulan, Sorsogon, went over to Eagle Broadcasting Corporation-NET 25 studio in Quezon City, along with their two other children, Robeth and Rocel, to ask media’s help in airing their appeal.

They said Lowell’s wife, Jinky just asked Abegail to take care of their daughter, Yurie, while they were assigned in the locale of Butag.

He said that the last time that they heard from their daughter on Sunday, she sounded very scared.  They said she felt isolated as she had no one to talk to but the Menorcas.

Abegail’s brother, Robeth, said they have been trying to contact her since to no avail. Since the Menorcas left the INC compound along Central Avenue in Diliman, Quezon City, the Yansons do not know anymore the whereabouts of their daughter.

They were also concerned that their daughter was being prevented by the Menorcas from attending INC worship services.

Abegail’s sister, Rocel, also made a similar appear to Lowell and Jinky Menorca to release Abegail.

Candido said his daughter, who was an active INC choir member in their locale, had wanted to come with them during their last visit to the Menorcas in August, but that Lowell refused to release Abegail.

Former Iglesia ni Cristo (INC) minister Lowell Menorca is allegedly holding his househelp against her will so she could testify against the influential religious group.

The family of Abegail Yanson made this allegation when they appeared before the media on Friday and asked Menorca to return Yanson, who has been with the former INC minister’s family since July.

(We haven’t seen her since August 29. We’re so eager to see her, but we don’t have communication with her since Sunday. We are worried. We can’t sleep thinking about her.)

Rosalie said the 24-year-old Abegail was asked by Menorca’s wife Dinky to help out with their children but she was not paid for it.

The family has last spoken with Rosalie on Sunday and have not heard from her since. They also don’t have any idea where she is.

(Last Sunday she made a call but after that, we lost contact. She wanted to leave but has not been allowed. She’s being forced to testify against INC but she doesn’t know what to do.)

Menorca had earlier accused members of the INC advisory council of having him kidnapped and detained so he could be killed for allegedly exposing the alleged corruption and other anomalies within the religious sect through a blog.