STORY OF A
FORMER CATHOLIC PRIEST 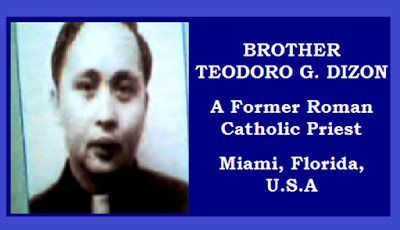 I AM TEODORO G. DIZON from the Locale of Miami, Florida. I was born in Camiling, Tarlac, Philippines, to a family of practicing Catholics. At the age of 11, I became an altar boy, assisting priests on many Catholic activities like fiestas, masses and other religious celebrations. I observed the works and sacrifices of the priests in serving the people. Drawn to this kind of service of being close to people, I made up my mind to become a priest and, at the age of 14, entered the seminary in Pangasinan, Philippines.


It was in my fifth year in high school (equivalent to first year in college at that time) when I heard about Brother Felix Y. Manalo and the Iglesia Ni Cristo (Church of Christ). The priest mockingly said that, upon the demise of Brother Manalo, the Iglesia Ni Cristo would vanish. I had the impression then that the members of this Church were unified only because of the dictates of Brother Manalo, which is why people, including me, referred to them as members of the "Iglesia ni Manalo" (Church of Manalo).

I was ordained as a Catholic priest on April 1, 1962. My first assignment as a new priest was in Concepcion, Tarlac. It was there where I received a call from a minister of the Iglesia ni Cristo, inviting me to a Bible study and discussion. I tried to ask permission from my superiors but was told not to go. Now I realize that, even then, I was being called to the true Church, for although I was not able to respond to that invitation, I was really interested to learn more about this Church.

In 1967, while I was assigned in Luisita, Tarlac, I was chosen to be sent to study in Rome. I was there for two years, studying Pastoral Theology and completing the degree of Licentiate in Sacred Theology. From Rome, I went to the United States in 1970 and became assistant parish priest in one of the parishes in the diocese of Brooklyn, New York. In 1976, I applied to be a U.S. Navy Chaplain.

I had a second encounter with the Iglesia ni Cristo in 1978 when I was assigned to the naval training center in Orlando, Florida as a chaplain in the navy housing compound. There I met and became close friends with Brother Romeo Manalaysay, then head deacon of the Orlando congregation, and his wife Ligaya. I even let them use the navy chapel for their worship services when their congregation did not yet have permanent place. At that time, Brother Lorenzo de Vera, the minister from Jacksonville, Florida, was one of the ministers being sent to officiate the worship services. Since I was responsible for opening and closing the chapel, I attended the worship services. During those times, I felt the call of God working in me and my belief in Christ as God was changing. Nevertheless, I argued and debated with Brother de Vera and another minister, Brother Dominador Santos, on certain religious issues. As my knowledge of the true teachings of God increased, I continued attending the worship services faithfully. I even had a chance to meet the late Brother Cipriano Sandoval during one of the special occasions of the Church.

I was subsequently assigned to Guam, where I continued attending the worship services of the Iglesia Ni Cristo when, at the same time, leading and saying mass as a navy chaplain. From Guam, I was assigned to Barstow, California, where I met Brother Reynaldo Valdez, the minister assigned in Riverside locale at that time. After officiating the worship services in Las Vegas, Brother Valdez passed by my place to conduct a Bible study. By this time I had already decided to leave the priesthood and study the doctrines being taught in the Church. Around this time, I also met Brother Paul Membrere, then district minister of California, who advised me to continue my Bible lessons. When I moved to Miami, I continued my biblical studies under Brother Danilo Besa, a volunteer worker.

On February 3, 1986, I was baptized in the Locale of Jacksonville, Florida by Brother Venros Santiago. This was the happiest day of my life on this earth. All the doubts in my mind, especially about Jesus Christ as a man, were cleared. I was also impressed by the unity and brotherhood among the members of the Church and the orderliness that is being observed during the worship services.

My conversion to the true Church was the happiest moment in my life. It freed me from the shackles of Catholic Church and her hypocrisy and false teachings which are contrary to the words of God written in the Holy Bible. I am presently a deacon and committee auditor in the Locale of Miami. I advise those who are not members of the Church, including the Catholic priests, to carefully read the Bible especially the verses pertaining to Jesus Christ that He is not God but man. And to all the members, be more active and dedicated to our membership. Let us be firm and steadfast in our faith because this will help the new members become more stronger in the Church.

During my Philosophy and Theology years in the seminary, our professor in Religion named Bernard Etrais remarked that, someday, the Philippines will send missionaries to the distant lands. I thought then that it would be the Catholic Church who would do that, but now I realize with firm faith and conviction that it is the Iglesia ni Cristo that is sending ministers all over the world.

I would like to thank the following ministers: Brothers Angel Casanova Sr., Felix Al Casanova, Angel Casanova Jr., Leopoldo Ricardo, and Manuel Andaya, the present district minister of the Southeastern Seaboard, and all the other ministers and brethren who helped me become a strong member of the Church. I would also like to extend my sincerest gratitude and love to my dear wife Agnes and to my daughter Kimberly, who both hold offices in our Locale of Miami, and to my in-laws, Brother Amado and Sister Aurora Tanedo, Sisters Arlene and Mel Tanedo for their acceptance and support. But most especially, I thank the Almighty God for giving me the light and calling me to serve in the true Church, assuring me that if I succeed, I would certainly receive the promised salvation come Judgment Day.

Click HERE to go to MAIN MENU of "INC CONVERTS"

Email ThisBlogThis!Share to TwitterShare to FacebookShare to Pinterest
Labels: Converts from the Catholic Church, INC Converts