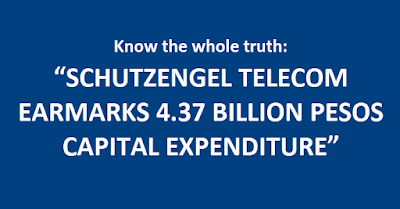 Note: Capital expenditure (or capex) is the “money spent by a business or organization on acquiring or maintaining fixed assets, such as land, buildings, and equipment.” 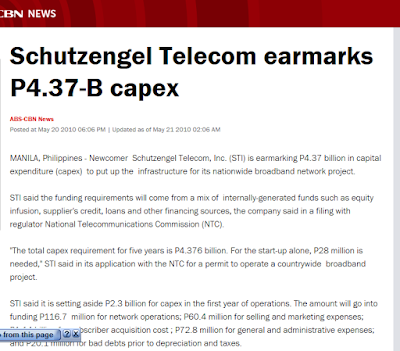 STI said the funding requirements will come from a mix of  internally-generated funds such as equity infusion, supplier's credit, loans and other financing sources, the company said in a filing with regulator National Telecommunications Commission (NTC).

"The total capex requirement for five years is P4.376 billion. For the start-up alone, P28 million is needed," STI said in its application with the NTC for a permit to operate a countrywide  broadband project.

STI said it is setting aside P2.3 billion for capex in the first year of operations. The amount will go into funding P116.7  million for network operations; P60.4 million for selling and marketing expenses; P1.14 billion for subscriber acquisition cost ; P72.8 million for general and administrative expenses; and P20.1 million for bad debts prior to depreciation and taxes.

The start-up said it will need more capex investments for the initial five years to enable it to achieve its  WiMax (Worldwide Interoperability for Microwave Access) subscriber base target of  912,000 on the fifth year. WiMax is a high-speed wireless broadband Internet service. STI's WiMax will be available in major business and industrial centers as well as individual subscribers.

STI, which is said to be backed by the religious group Iglesia ni Cristo, expects to swing into profit on its second year of operations, and earn P1.8 billion, which will increase to about P3.4 billion in five years.


The beginner had an initial capitalization of P31.25 million, which it recently hiked to P531.25 million. This will further be increased to  P2 billion before the end of the first year of operations.

"The company intends to focus its services on a growing individual market hungry for fast service solutions. To successfully penetrate the market, establishing immediate awareness among its target customers as a reputable WiMax provider is imperative. An effective promotions strategy is therefore critical," STI said.

The company is awaiting the approval by the NTC, of its application for a  3G or third generation  and cellular mobile telephone system permit.