A (lying) message from Rolando Dizon


A (LYING) MESSAGE FROM
ROLANDO DIZON 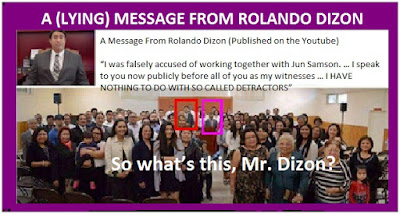 MORE than one month has passed since Rolando Dizon (an expelled member and former minister of the Iglesia Ni Cristo) published on YouTube a video wherein he categorically denied that he has nothing to do with the so called detractors. He said:

“I was falsely accused of working together with Jun Samson. … I speak to you now publicly before all of you as my witnesses … I have nothing to do with so called detractors…”

So what’s this, Mr. Dizon?
Why were you with these detractors if you have nothing to do with them? 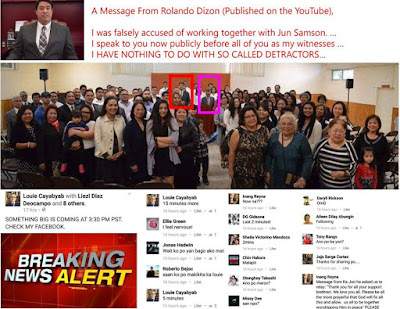 Perhaps you might reason out that this picture only reveals that you’re with Mr. Heart of Hearts, Luisito Cayabyab, and the other “INC Defenders” or should I say, INC detractors? But isn’t it that Luisito Cayabyab and Isaias Samson, Jr. belong to the same group of INC detractors? Or could it be that these two have already gone separate ways and you chose to side with Louie Cayabyab rather than Jun Samson?

This picture speaks louder than your words, Mr. Dizon. It explains why Louie Cayabyab was able to announce ahead of time that something big was coming and that a countdown was even given by him to elicit an aura of suspense from his FB followers. This reveals that you were in contact with Louie Cayabyab before you published the video. By the way, wasn’t he the one who prepared the script that you read? It looks like a sequel to Mr. Heart of Hearts’ drama which was also uploaded on YouTube last year.

Did you think you can hide your treachery? Did you think you can cover up your real colors by appealing to sympathy and by trying hard to sound like you’re crying, while repeating the same words—like “I love you”—as you try to convince Church members to side against the Church and lose their salvation?

You seemed to have forgotten something, and so I deemed it necessary to remind you: