"Church Of Christ" Not A Religion?


“CHURCH OF CHRIST” NOT A RELIGION? 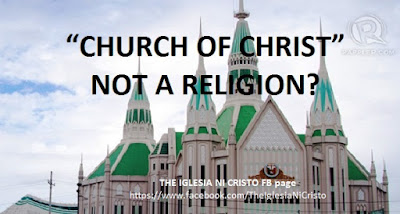 IS it true that the “Church of Christ” is not a religion? Nowhere in the Bible we can find a verse that says “the Church is not a religion.” This is only based on opinion. On the other hand, the Apostles and the true Christians explicitly said that the Church where they belong is their religion:

I Timothy 3:15-16 TEV
“But if I delay, this letter will let you know how we should conduct ourselves in God's household, WHICH IS THE CHURCH of the living God, the pillar and support of the truth. No one can deny how great is the secret of OUR RELIGION…” (Emphasis mine)

Webster’s Third International Dictionary, page 1918
“Religion — prob.  Fr. religare, to tie back, the personal commitment to and serving of God or a god with worshipful devotion, conduct in accord with divine commands especially as found in accepted sacred writings or declared by authoritative teachers, a way of life recognized as incumbent on true believers, and typically the relating of oneself to an organized body of believers.”

Ephesians 4:12 God’s Word
“ Their purpose is to prepare God's people, to serve, and to build up the body of Christ.”

Eph 2:16-17 God’s Word
“He also brought them back to God in one body by his cross, on which he killed the hostility.”

The “one body” the Bible referred to is the “Church of Christ”:

I Cor 12:12 Weymouth
“For just as the human body is one and yet has many parts, and all its parts, many as they are, constitute but one body, so it is with the Church of Christ.”