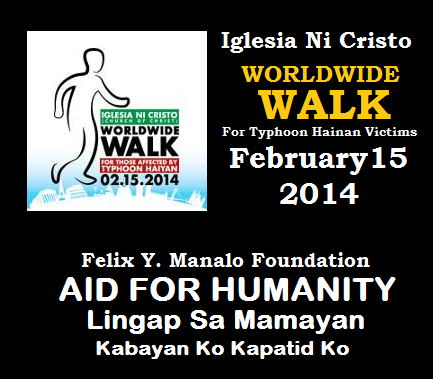 "Love your neighbors as you love yourselves." These very words of the Lord Jesus Christ what move the Administration and members of the Iglesia Ni Cristo (Church of Christ) to hold this event called "Worldwide Walk for Haiyan/Yolanda victims" that will be held on February 15, 2014, in different sites all throughout the world.

Due to the super typhoon that struck the province of Leyte, especially the City of Tacloban, thousands were left dead and thousands more were left homeless. Our fellowmen in Tacloban need new homes, but can they built new one if their livelihood were also devastated? Thousands now living in tents and shanties. Because of this, although the Iglesia Ni Cristo already built 60 new houses, the Church Administration decided to built a new community for our fellomen in Tacloban and other parts of Leyte. Thus, we will hold the Worldwide Walk to build more new homes.

The Worldwide Walk for Yolanda victims will be held in all ecclesiastical districts of the Iglesia Ni Cristo (Church of Christ) all throughout the Philippines, and with forty-four (44) sites all throughout the world. Everyone are invited to join, members and non-members alike.


In Metro Manila, there will be three starting sites: Recto Avenue (in front of Issetan), Delfan, and CCP ground. The walk will start at 8:00 am. There will also be sites in different provinces of the Philippines, and also in London, Australia, New Zealand, Tokyo, Rome, Washington DC, and many more. For the sites in the provinces, contact the resident ministers of your local congregation.

A person needs to walk in the designated lane and walk 1.6 kilometers to be counted as "walker."There will be a lane for senior citizens and people with disabilities.

Currently, Singapore holds the world record for the biggest numbers of participants in a single event with 76,000 participants in the year 2000. With an expected 2 million participants and a close to 140 sites all throughout the world, the INC Worldwide Walk for Yolanda Victims is expected to set a new world record. Thus, this event will not only help the Yolanda victims, but will also set not only one, but two world records.

You're a non-member? You can also join this event. this is not a religious event, but a civic event showing our care for our fellowmen.

So, come and join us. Be part of this great and historic event!

There will only be one meeting site:
CCP ground