Examining the Basis of Other Churches


ARE THEY TRULY BIBLICAL?
Examining The Basis Of The Doctrines Of Different Churches 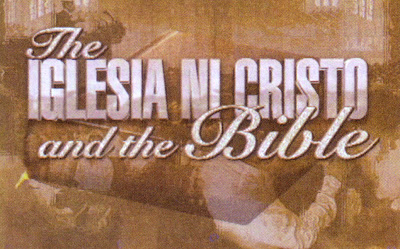 While all the teachings upheld by the Iglesia Ni Cristo
(Church of Christ) are truly based on the Bible, however, careful
examination of others reveals that the doctrines of other
churches cannot be found in the Bible
___________________________

MANY CLAIM THAT their doctrines are "biblical" or based on the teachings of the Bible because they know that no one can claim that their's is the true religion if they are not truly biblical. However, are they truly biblical? Let us examine the basis of the doctrines of different churches.


The Importants of Being Truly Biblical

It is very important that we make sure that all the teachings we are following are written in the Bible because.


(1) The Apostles strictly forbid us “going beyond what is written”:

“Now, brothers, I have applied these things to myself and Apollos for your benefit, so that you may learn from us the meaning of the saying, "Do not go beyond what is written." Then you will not take pride in one man over against another.” (I Cor. 4:6, NIV)

(2) They worship God in vain those who follows the doctrines and commandments of man:

“And in vain they worship Me, Teaching as doctrines the commandments of men.'” (Mt. 15:9 NKJV)

(3) God will punish and take away their part from the Book of life:

Even Catholic authorities admit that no church can call itself a true Christian if its teachings are not in harmony with the Bible:
“No Church can call itself Christians if its teachingsare not in harmony with the Gospels.
"That is true. Since what the Gospels contain is true, all that they teach must be included in the teaching of any Church which claims to be Christian.” (That Catholic Church, p. 69)

Thus, let us examine the basis of the doctrines upheld by different churches.

The Catholic Church believe that the Bible does not contain all the truths necessary for salvation:

“The Bible does not contain all the truths necessary for eternal salvation.” (My Catholic Faith, p. 123)

For the Catholic Church, the Bible is not the ultimate rule of faith:

“...not the written word that is the ultimate rule of faith.” (Plain Talks on the Catholic Religion, p. 124)

The Catholic Church admits that they taken over pagan rituals and symbols:
“She does not hesitate even to take over pagan ritual and pagan symbols, whenever such things can be Christianised and reformed.” (Spirit of Catholicism, p. 166)

The teachings of the Methodists came from different religious groups

The teachings of John Wesley which upheld by the Methodists sects and other Protestants came from different sources and not from the Bible. The “oldest Methodist doctrinal materials” are the doctrines and historic worship of the Church of England:

“The oldest Methodist doctrinal material, from the age of the Wesleys themselves, describes the distinct mission of the Methodist people. The Methodists of the Wesley’s age did not consider themselves to be a separate church, and they accepted the doctrine and the historic worship of the Church of England.” (Methodist Doctrine: The Essentials, p. 20)

“A second phase of Methodist doctrinal development came about when the Methodists became American denominations (in the period 1784 and 1870). In this period various Methodist churches adopted doctrinal statements that express more of the fulness of Christian teaching. The Twenty-five Articles of Religion held common by the AME, AMEZ, CME, and UM churches, as well as the UB Confession of Faith (on which the current UM Confessions of faith is based) date from this period.” (Ibid., pp. 20-21)

The Twenty-Five Articles of Religion became the articles of faith of many Protestants sects like the United Methodist Church (UM), United Brthren in Christ (UB), African Methodist Episcopal Church, etc. Another Methodist doctrinal materials are the Roman Catholic Creeds:

“A sign of this is the growing use by Methodists of historic Christian creeds. Although Methodists churces had used the Apostles’ Creed from the 1800s, they also began to utilize the Nicene Creed from the middle of the 1900s.” (Methodist Doctrine: The Essentials, p. 22)

The Methodists also borrowed from the mainstream Protestants and the Arminians:

“In matters of faith, there has been very little occasion for confusion or difference; doctrinal quarrels have been noticeably absent. Historically, Methodist have not built theological fences to keep anyone out; they have stressed the foundational belief of Protestantism and have offered the theological common ground…The theology is Arminian…” (Mead, Frank S. Handbook of Denominations in the United States, 11th ed., p. 229)

What is worst, these prople  claiming  “Sola Scriptura” (Scripture Alone), also believe that reason can illuminate the meaning of the Bible:

“John Wesley believed that reason guided by the grace available to all persons could discern the existence of God and the need for moral responsibility; it could even illuminate the meaning of the Bible.” (Methodist Doctrine: The Essentials, pp. 38-39)

The Methodists are the followers of Wesley:

“‘What’s in a name?’ Followers of John Wesley have been called Methodists for over 250 years.” (Hetzenrater, Richard P., Mirror and Memory: Reflections on Early Methodism (Nashville, Tennessee: Abingdon Press, 1989, p. 13)

“Wesley valued experience especially as human contact with God, and he believed that our experience of the divine also illumined our own spiritual quest and (combined with reason) could clarify the meaning of the Bible.”(Ibid., p. 39)

The experience Wesley reffering is not only the “experience of the divine” but also of the “esperienceof the material universe.”

“Wesley also believed that our experience of the material universe could teach us much, even about spiritual matters…” (Methodist Doctrine: The Essentials, p. 39)

Aside from reason and experience, Wesley and the Methodists also used traditions in understanding the Bible:

“Our emphasis on the sufficiency and primacy of the Scripture does not rule out the use of Christian tradition or reflection …” (Methodist Doctrine: The Essentials, p. 36)

Take note that the Methodists claim that they are “Sola Sriptura” but they also teach that “the suffciency and primacy of the Scripture does not rule out the use of Christian traditions.

This teaching of John Wesley that upheld by the Methodists and other Protestant groups is against the teachings of the apostles:

“Knowing this first, that no prophecy of Scripture is of any private interpretation.” (II Pet. 1:20, NKJV)

Will tradition help in understanding the words of God written in the Bible? In Colossians 2:8, this is written:

“Beware lest any man spoil you through philosophy and vain deceit, after the tradition of men, after the rudiments of the world, and not after Christ.” (Colosas 2:8, KJV)

Thus, the doctrines uoheld by the Methodists are and their undestanding of the Bible are not biblical.

The Bible is not the only basis of Presbyterian teachings

Like the Methodists, the Presbyterians also claim that the Bible is the only basis of their faith, but in truth, they also disobeyed what the spostles strictly forbid – “going beyond what is written.” Aside from the Bible, the Presybyterians have other basis for their teachings:

“All Presbyterian Churches declare that the supreme standard of faith and practice is contained in the Scriptures, and most of them adopt  the Confessions and Catechisms of the Westminster Assembly as subordinate standards...” (The Oxford Dictionary of the Christian Church, p. 1120.)
The Presbyterians claim that the Scripture is the “supreme standard” of their faith and practices, however, they also adopt the Westminster Confessions and Catechisms as their “subordinate standards.” They also used the Apostles’ Creed and the Nicene Creed:

“Most Presbyterians accept also the creeds of the early undivided Christian Church – the Nicene and the Apostles’ Creeds.” (Bonnell, p. 201.)

The Presbyterians also borrowed from the teachings of the Church Fathers and Schoolmen:

“In the teachings of the Fathers and Schoolmen the term (election) plays an important part in connexion with Predistination (q.v.). St. Augustine expoumds at length the belief that gratuitous predistination to eternal salvation presupposes an act of election on the part of God. Though the Fathers frequently use the terms ‘election’ and ‘predistination’ without distinction, some later theologians, e.g. St. Thomas Aquinas give ‘election,’ as an act of the will, a logical priority over predistination...The doctrine of election filled a central place in the Institutes of J. Calvin…This belief was every where held by Calvinist theologians…” (The Oxford Dictionary of the Christian Church, p. 450.)

John Calvin’s doctrine of “election" and “ptredistination” (the so-called distinguishing doctrine of the Calvinists – the Reformed and the Presbyterian churches) were borrowed (or copied) from the Church Fathers, like Augustine and Thomas Aquinas.

(1) They believe that the seventh-day Sabbath (the keeping of the Sabbath) was instituted after the sixth day of creation:

“We believe that the seventh-day Sabbath was instituted at the end of the creation of the world in six literal days:” (Wearner, p. 102)

This is not wahat is written in the Bible:

The Bible mentioned that God “blessed the seventh day and made it holy because on it he rested from all the work of creationg that he had done.” However, no where in the verse we can find that God instituted in that day the keeping od Sabbath?

(2) They believe that Sabbath keeping is as old as the world itself, widespread, and bearing the sanction of the angels :

“The Sabbath and its observance were…ancient and widespread, even as old as the world itself, and bearing the sanction both of angels and of God.” (Ibid., p. 103)

No where in the Bible we can find saying “the keeping of Sabbath bear sanction both of angels and God.” The teachings that Sabbath keeping is as old as the world and widespread are not only unbiblical, but against the teachings of the Bible:

“And say to them: 'This is what the Sovereign LORD says: On the day I chose Israel, I swore with uplifted hand to the descendants of the house of Jacob and revealed myself to them in Egypt. With uplifted hand I said to them, "I am the LORD your God."
“Therefore I led them out of Egypt and brought them into the desert.  I gave them my decrees and made known to them my laws, for the man who obeys them will live by them.  Also I gave them my Sabbaths as a sign between us, so they would know that I the LORD made them holy.” (Ezek. 20:5,10-12 NIV

According to the Bible, the law of keeping the Sabbath was given to the Israelites (thus, it was not widespread), and given after they were led out of Efypt (thus, not as old as the world).

(3) They believed that Sabbath keeping was committed to Adam:

“The Sabbath was committed to Adam, the father and representative of the whole human family.” (Ibid., p. 104.)

Saying that the Sabbath was committed to Adam was totally unbiblical. This was what God commanded Adam and Eve:

“And the LORD God commanded the man, "You are free to eat from any tree in the garden;  but you must not eat from the tree of the knowledge of good and evil, for when you eat of it you will surely die.” (Gen. 2:16-17, NIV)

Email ThisBlogThis!Share to TwitterShare to FacebookShare to Pinterest
Labels: About the Doctrines of the Church, Examining Other Religion